Own or Rent?  Exclusive Licenses Can Be More Valuable Than Owning Patents Outright.

Patents encapsulate the hopes and dreams of a company and many investors, CEOs, and inventors have a negative gut reaction about not “owning” their patents.  For some reason, “owning” their patents is a deeply emotional issue, but it should not be.  Exclusive licenses offer far more benefits than “owning.”

Exclusive licenses are regularly done by universities and other technology transfer offices, as well as by patent holders and patent finance companies.  These agreements are the way technologies can be moved into the marketplace without burdening a startup company and while giving the patent owner participation in the success.[1]

How does it work?

A licensor will grant an exclusive license when it wants another company to bring a technology to market.  The exclusivity gives the licensee the incentive to invest in developing the market potential of the technology.

In contrast, a non-exclusive license dis-incentivizes the licensee from investing in developing a market.  This is because the licensor could sell licenses to all of the company’s competitors after the first licensee educates and cultivates the market for the product.

For a startup, having an exclusive license to a patent is actually more valuable than “owning” a patent.

Patents are a big capital investment for a startup company, but so is an office building.  However, no startup company owns their office building outright.  Even if they did own the building, they would take a mortgage on the building to free up capital.  Exclusive licenses are the same thing as a lease agreement: the startup has full control of the assets, but does not have to spend capital to build or maintain the asset.

In a licensing agreement, the licensee and licensor have aligned incentives.  Both parties want the licensee to be successful.

The patent holder has every incentive to have a good patent.

Many licensing organizations, such as a select few of the major universities, have professional patent management systems in place.  They professionally curate inventions and manage their portfolio to maximize the value to their licensees.[2]

When this is done well, the licensee startup company can benefit from professional patent management systems that they otherwise could not afford.  Further, the licensor is incentivized to invest in the patents by paying for expedited costs, the additional costs for going up on appeal with the Patent Office, assistance in defending the patent from reexamination, or other costs that the startup can avoid.

From a purely financial standpoint, an exclusive license reduces immediate patent costs and makes the costs predictable and manageable.

For a startup, unpredictable costs make for very difficult decisions.  Should the CEO spend $4,000 on an office action response for the patent, or have a booth at a startup conference to attract investors?  Which of these expenses will have the best return on investment for the company in the short term?  Which expenses would be best in the long term?

In the analogy of owning the office building, a startup might be faced with an emergency roof repair, a plugged drain the bathroom, or repaving the parking lot.  The unpredictable nature means that capital needs to be set aside to deal with the variability.

Unpredictable costs, such as patent costs, are managed by keeping a prudent reserve.  The reserve can be managed explicitly, such as setting aside so many dollars for patent costs, or may be reactionary, where there is a churn of unpredictable expenses.

The prudent reserve – no matter how prudent – is still capital that cannot be deployed to grow the business.  The more costs that can be predicted, the fewer reserves need to be set aside for the unpredictable costs, and the more capital can be fully deployed to advance the business.

When capital is scarce, it is very expensive.  Most startups are capital constrained to the point where they sell off huge chunks of equity in exchange for small amounts of cash.  In fact, most angel and venture backed capital comes with a cost of capital on the order of 40% per year.[3]

With the capital costs outrageously high, it makes sense to pay as little as possible and still control an asset.  This arrangement leverages someone else’s investment for the benefit of the company.

License fees are expenses and not an asset that needs to be capitalized.

Patent assets are often capitalized over 20 years, which is the lifetime of the assets.  When a portfolio company pays a license fee, that fee is a direct expense and is not capitalized.  Not only is the license fee less than they would have paid initially, but those fees come directly off the bottom line.

Operationally, Exclusive Licenses Can Give A Company More Flexibility.

A startup company may change focus, pivot, regroup, or find itself in a new market where their first patents are not useful.  With a license agreement, the startup can often change the agreement without severe financial impact.

For example, an exclusive license agreement for a set of patents may allow the startup company to eliminate one or more patents from the agreement to reduce its costs.  The licensor is taking a risk in that agreement, but giving the licensee more flexibility.

Many exclusive licenses allow for sublicensing.

Some exclusive licenses provide the option to sublicense the technology to another company.[4]  Because the startup company has the exclusive license, the startup can often perform outbound licensing, such as sublicensing to competitors or spinout companies.  This gives a startup company virtually the same business options as it would have had if they owned the patents outright.

The allowable uses of the assets and the payments associated with those uses can be negotiating points when taking a license.  The key for the startup licensee would be to determine their likely usage scenarios of the assets first, then negotiate favorable terms for the most important uses of the assets.

Many companies or universities that license technologies to startups can have very favorable terms for startups.  For example, a startup may be able to negotiate zero payments for a period of time yet may still have the full control of the assets during that time.  As the startup becomes profitable or meets certain milestones, the payment terms may change to still be affordable.

Many license agreements are transferable.

Many license agreements are transferable to another company, such as an acquiring company.  Transferable licenses can be just as valuable – if not more – than transferring the patents in some situations.

Other license agreements may terminate on certain events, such as the licensee itself being sold.  Often, such agreements may provide that the acquiring company may take a license under the same terms as the first licensee, which effectively makes the license transferable.

Some licenses are not transferable.  These can pose unwanted restrictions on a startup’s ability to exit, so these terms should be negotiated carefully.

An interesting side benefit of having patents in a separate entity is that the operating company is much less exposed to lawsuits.

Exclusive patent licenses are well known and respected throughout industry.

Many startup companies and CEOs do not have direct experience with exclusive or non-exclusive licenses, but these types of agreements are well respected and enforceable.

A license agreement is merely a contract.  In the contract, each party can spell out their terms for what they receive and what they give in return.  The license agreement can contain provisions such as arbitration clauses, mechanisms to rectify late payments, and all sorts of other terms.

Because license agreements are contracts, they can be negotiated, drafted, and reviewed by conventional contracts attorneys and enforced in local state court.  This makes the costs relatively manageable.

Note:  This is an excerpt from the book “Investing In Patents: Everything a Startup Investor Needs to Know About Patents” by Russ Krajec.  The book is available on Amazon. 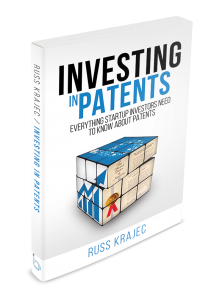 [1] Startups themselves may use exclusive licenses to give suppliers, vendors, competitors, or complementary businesses certain rights.  An exclusive license may be narrowly focused, such as giving exclusive rights in a certain industry or geography.

[2] Sadly, most university technology transfer offices are woefully incompetent and do a very poor job.  This is due to the fact that few understand the needs of the startup companies that the serve, as well as very poor internal incentives to close license deals.

[4] Not all exclusive licenses provide for sub-licensing or cross-licensing options.  Sometimes, these provisions can be limiting to a startup company, while other times not.  It is important to know what restrictions – if any – come with the license agreement.